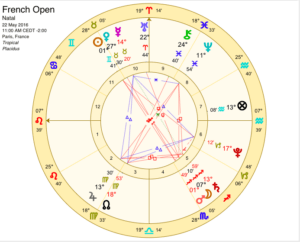 Update: Super pleased with another correct prediction. Gemini Novak Djokovic won his 12th Grand Slam on a day when there was a New Moon in Gemini, crowning him winner.

From an astrology perspective, I loved the fact that Novak, a Sun Gemini, accepted his award and spoke to the crowd in French & English. Dual-natured Gemini is the sign of communication and Novak showed he is a competent linguist as well as a phenomenal tennis player.

Plus the Uranus signature conjunct the Midheaven proved disruptive with regard to both the weather (10 days of rain, no sunshine, many delayed matches) and three top tennis players ruled out because of injury – Federer, Nadal & Tsonga. Next stop… Wimbledon. Can’t wait!

There’s a strange feeling of deja-vu when you consult the chart which pinpoints the start of the second tennis Grand Slam of the season, the French Open in Roland Garros, France.

This is because, like last year, the planet which represents surprises, Uranus, is conjunct the Aries Midheaven. Last year Uranus was at 18 Aries, this year it’s at 22 Aries.

Stanislas Wawrinka was the surprise winner in 2015 beating Novak Djokovic in the final. A Sun Aries, Stanislas was loving the Uranus transits which picked him out from the crowd.

One year later and there’s a record waiting to be broken. Sun Gemini, Novak Djokovic, has dominated the Grand Slams over the last year and a half winning the last three Grand Slams, Wimbledon & the US Open in 2015 and the Australian Open earlier this year.

If he wins the French Open, which he has never won before, he will be the first tennis player since Rod Laver in 1969 to hold all 4 Grand Slam titles. No pressure then!

Here’s a look at the astrology for the coming event:

Uranus is the planet of the unexpected, the unpredictable and in true Uranus style, we have the first surprise of this Grand Slam. Roger Federer will not be a contender as he misses his first Grand Slam in the 21st Century due to minor knee and back injuries. A sad loss especially for all the Federer fans and of course Roger. Clay is perhaps his least favourite surface so perhaps the best option for him in the long run if he has his sights set on Wimbledon.

In astrology, Saturn rules bones and joints and the Sun is linked to the back and the spine. Saturn has been square Roger’s Virgo Ascendant since the end of last year and the Ascendant is the gateway to the physical body, the 1st house of the astrology chart.

Saturn is currently retrograde at 13 Sagittarius and will retreat back square to his Ascendant early July, turn direct mid-August and make one final square aspect in late September 2016. It’s not brilliant timing for Wimbledon or the US Open but no doubt his team is on it. Astrologically he does have the bonus of Jupiter in Virgo and his 1st house and where Saturn restricts and limits, Jupiter believes anything is possible.

Rafael Nadal is another tennis player who’s struggled with injuries over the last few years, especially to his knees. He has Saturn in his 1st house in his natal chart and opposing his Sun, which rules energy and vitality. This is not an easy signature for a sportsperson but if anyone has proved his resilience and determination, key factors of a Sun-Saturn opposition, it’s Rafael Nadal.

Rafael has been back to winning form recently although he’s still been beaten by both Andy Murray and Novak Djokovic in the lead up to this tournament. This is of course his favourite playground and he’s sometimes referred to as the King of Clay. He’s won the French Open a record nine times. It’s not going to be an easy route to the final as he’s likely to face Novak in the semi-finals and he is one year older than both Andy & Novak. In fact, Rafael turns 30 during the tournament.

Like Roger, he has Saturn transits all year as Saturn is opposing his Sun at 12 Gemini. The middle transit is exact on June 7th 2016 so once again he’s going to have dig deep if he’s to dominate. It will be a big ask. On the day of the final, June 5th 2016, there is a lovely New Moon at 14 Gemini so close to Rafael’s natal Sun. The chart for the final has the Moon, Sun and Venus all close to the Gemini Midheaven, so this does lean towards a Sun Gemini winner if he can stay free of injury.

Stanislas Wawrinka is the title holder and when he won the French Open 2015, the planet of surprises, Uranus, was at 18 Aries and conjunct his natal Mercury/Venus Aries. Uranus is often date specific so with Uranus now at 22 Aries, this isn’t as close to Stanislas’ natal planets and he might not be able to spring a surprise second time around. Uranus does pick out his natal Moon at 23 Gemini in a sextile aspect but the Moon rules his Cancer Ascendant, so this is more about him personally than his tennis/career.

Many people believe that the French Open is going to be decided between Andy Murray and Novak Djokovic. Andy beat Novak last week on his birthday to win the tennis tournament in Rome although at the previous tournament, Novak defeated Andy. Either way, these seem to be the two to watch if all goes to plan.

Andy is born only one week before Novak so they have similar planetary positions. The main difference is that Andy is a Sun Taurus and Novak is a Sun Gemini.

Plus Andy has a similar Ascendant/Midheaven combination to Roger Federer. Andy’s Ascendant is 14 Virgo and Roger’s is 11 Virgo. This is important with regard to the Jupiter-Saturn combination which is currently tricky for Roger. Saturn is again in close square to Andy’s Ascendant, in fact on the day the French Open starts, Saturn is at 13 Sagittarius 59 so in an almost exact square. However Jupiter turned direct on May 9th at 13 Virgo 15 and is slowly moving closer to Andy’s Ascendant. It will be exact on his Ascendant on June 1st, the Wednesday of the final week. If he remains fit, astrologically it’s down to Jupiter.

As the tournament begins, the Sun is moving towards a conjunction with Andy’s natal Mercury in Gemini, the tennis planet and his career ruler. On the day of the final, his natal Mars in Gemini is close to the Moon on the Midheaven of the Final chart. He’s got to be in there with a shout.

The tournament begins on Novak’s birthday so it’s the day of his Solar Return. There’s always debate about Novak’s time of birth but I’m sticking with this one which has worked for me so far. This means that Jupiter is also important for Novak because it turned direct at 13 Virgo and remains sextile Novak’s Midheaven, career point, at 14 Scorpio. This influence lasts from April to June 2016.

If the time of birth is correct, he has Pluto going back and forth over his Ascendant and when he won at the Australian Open in January 2016, it was almost exactly conjunct his Ascendant at 16 Capricorn. This isn’t an easy transit but in Novak’s chart, Pluto is close to his Scorpio Midheaven and this is what gives him his relentless determination. Pluto at its best will not give up.

This is obviously going to be a huge tournament for Novak, his missing Grand Slam and his chance to break records. On the day of the final, the New Moon falls close to Novak’s natal Mercury in Gemini, the tennis planet and it’s a glorious line up of Gemini planets conjunct the Gemini Midheaven on the Final chart. Unless something goes massively wrong, astrologically this elusive Grand Slam is there for the taking.

This prediction has been written in super-fast time and although I’ve glanced at the charts of the Best of the Rest, there’s no astrology leaping out at me at present. I will take another look this week when I get time as the Uranus signature does suggest there could be surprises but I couldn’t find it close enough to another player’s key planets.

Below is the chart for the French Open final for those of you who love to check out the astrology. I’ve gone for a 2:30pm time which I’m not completely sure is accurate. I hope so. The New Moon in Gemini has got to favour Novak Djokovic and he’s my pick for the tournament and an epic win.