I watched Eurovision last night for the first time in ages and loved it. It is such a glorious mish-mash of music, culture, colour, diversity, performance, catchy tunes, incredible voices, noise and general over-the-top quirkiness and madness. Why would you want to leave that behind? Not that we will lose Eurovision if we leave Europe, which is insane because why would you want to lose all that culture and diversity?

Anyway, that’s not really the point of this post. I switched off Eurovision before the votes came in last night (as the voting procedure is interminably long) but knew who I wanted to win and she did. The glorious Netta from Israel with her bonkers song Toy. The lyrics: ‘Look at me, I’m a beautiful creature’ and she was, also the memorable lyric ‘I’m not your toy, you stupid boy’. I hope Harvey Weinstein et al were watching.

Plus the Sun-Jupiter opposition straddles the Ascendant/Descendant, a planetary aspect that is all about big gestures and glorious extravagance, a perfect symbol for Eurovision.

I also like the fact that Venus is in Gemini in the chart, symbolising two women, and Cyprus’ Eleni came second with ‘Fuego’ Fire and one of those songs that you have to dance to. She was captivating to watch and gorgeously sexy.

Which just goes to prove that woman is beautiful and sexy in all its different shapes and forms. Two women came 1st and 2nd last night at Eurovision and both of them were beautiful. 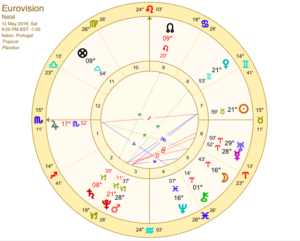