Two weeks ago I went to see an outdoor exhibition of sculpture at Somerset House in London. The exhibition by the chinese artist Ai Weiwei consists of 12 bronze animal heads representing the 12 animals of the chinese zodiac. The 12 animals are Rat, Ox, Tiger, Rabbit, Dragon, Snake, Horse, Ram, Monkey, Rooster, Dog, Boar. The chinese zodiac differs from the western zodiac in that each animal represents the year you were born rather than the month or time of year. 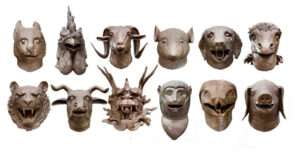 The animal heads are a reproduction of the zodiac fountain clock which was part of an imperial retreat outside Beijing called the Yuanming Yuan, or Garden of Perfect Brightness. Created in the 1700’s, the Yuanming Yuan was looted and burned in 1860 by British and French troops in one of the final and decisive acts in the Second Opium War. Today, seven of the original animal heads have been found but the whereabouts of the remaining five are unknown. 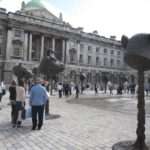 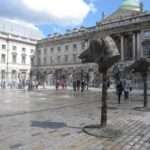 Zodiac means literally “circle of animals” and Ai Weiwei wanted these new sculptures to be enjoyed by everyone, adults and children alike. The setting at Somerset House encircling the outdoor fountains is spectacular and well worth a visit. The exhibition runs until June 30 2011. Ai Weiwei was detained by the chinese police in April 2011 and the artist has been missing ever since.

find out more at www.zodiacheads.com