The alternative title to this post was: “A Prince, A Farmer, A Virgin And Me”. However, I do think I may have lost a fair few people because, let’s face it, what’s that all about?!

These three characters are the Triumvirate of Cologne Carnival, the wildest and craziest Carnival celebration in Germany. In fact, it’s one of the biggest celebrations outside of Rio de Janeiro in Brazil and this weekend, Dave, Merida and I are off to Cologne to celebrate Carnival in style. 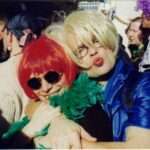 Me and my good friend Georg at Karneval

Carnival in Cologne is almost as old as the city itself but the organised Carnival that is celebrated today began in 1823.  Carnival is the “fifth season” of the year and begins officially on 11th November at 11:11. But the real “crazy days” begin on Weiberfastnacht, Shrove Thursday, the first day of Carnival, which this year falls on 16 February 2012, and closing times for pubs and bars are suspended for the duration of the festival, until Ash Wednesday, 22 February 2012.

It’s not 100% sure what Carnival means but many people believe it means “carne vale”, farewell to meat. What is for sure, it’s the period before Lent and the perfect excuse to be excessive, party and go wild.

Weiberfastnacht (Women’s Day), 16th February 2012, is celebrated in commemoration of an 1824 revolt by washer women. The women in Cologne run riot; they storm city halls, cut off men’s ties and kiss any man who passes their way. Effectively, women are in charge and get to do what they want. Excellent! The Prince at Karneval

The main event, however, is the parade on Rosenmontag (Rose Monday), 20 February 2012, and to put the Cologne Carnival in to perspective, here are some figures I found on the net. The length of the parade is 6 km (the parade route is only 6.5km); there are over 10,000 participants, 350 horses and 117 bands.

The participants throw 140 tonnes of goods into the crowd, this includes 700,000 chocolate bars, 220,000 boxes of sweets, 300,000 bunches of flowers and numerous other assorted gifts. You’re in more danger of being knocked out by a chocolate bar than you are going home empty-handed.

The Prince, The Farmer and the Virgin are the three main characters in the Carnival procession and it’s a great honour to be chosen to be one of the three (I think you have to pay for the privilege). The Prince is “Seine Tollitaet” (His Madness), the Farmer is “Seine Deftigkeit” (His Heftyness) and the Virgin (always played by a man in drag, but no moustache or beard allowed!) is “Ihre Lieblichkeit” (Her Lovelyness).

So, that’s a quick heads up on Cologne Carnival. Our wigs are packed and rucksacks are at the ready; we’re off to grab some chocolate.