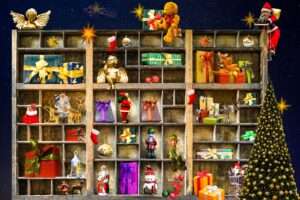 The Christmas horoscopes give you a taster of what you can expect to receive every Sunday morning in your weekly astrology newsletter. Click here to join today.

The important changes come immediately for you because communication planet Mercury turns retrograde half way through your sign of Capricorn on Monday 19th December.

This is classic symbolism for a review or having to go back over something you began earlier in the month or even earlier in the year. Take your time if this is the case because you probably don’t have all the information you need to hand  until Mercury turns direct on January 8th 2017.

In fact, it would be best to postpone any major decisions that are about you personally until the end of the month or even mid-January. Take your time and allow yourself some space and freedom to think things through on your own.

Other people might try and get in on the act, tell you their opinion and give you their views whether you want to hear or not. Ultimately, this is your decision and it’s up to you how you act.

The reason why there’s a lot of clamour going on over the next fortnight is because action planet Mars enters Pisces and your communication sector on December 19th, the same day as Mercury turns retrograde.

So on the one hand, you want time to be quiet whereas on the other hand there’s a lot of noise from other people.

Mars in Pisces is a sociable placing so it’s an ideal time to catch up with relatives, enjoy drinks at the neighbours and hang out with your nearest and dearest. Pisces rules your local community so get involved with people who live close to your home and join in some of the Christmas festivities.

The period between Christmas and New Year looks especially lively and by then the Sun is in your sign of Capricorn. The Sun enters Capricorn on the day of the Solstice, December 21st.

So you might be entertaining others after the Christmas weekend or enjoy sharing your ideas with like-minded people. This would be an excellent time for a year review, looking at how far you’ve come and what you want to do differently in the year ahead.

Creative Neptune is pulled into the planetary picture so tap into your artistic talents and use your imagination and visual tools to drum up some excitement for 2017. The New Moon in Capricorn on December 29th could be a stand out date for you and a great day to set your intentions for the year ahead.

The big Christmas astrology lights up the foundations of your chart. Jupiter is in Libra ruling your career and vocation, your future, and Uranus is in Aries ruling your home and family, your past. The two clash and Uranus in particular is in excitable mood.

There might be unexpected events which throw your plans into upheaval. You could hear about a change of job which means that someone close to you is moving. Or you might be the one who’s ready to swing into action and start a family, find somewhere new to live, change your career path.

Listen carefully during this festive season as your planet Saturn supports the two planets of change. You’re either the one holding everything together or the person other people turn to as the voice of reason.