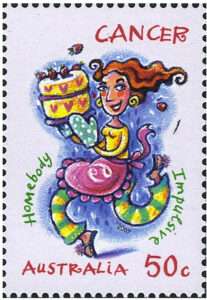 A powerful month going on in the heavens for you, Cancer, with the focus firmly on love and relationships or anything you feel strongly passionate about. There are two majors reasons for this and why you’re in for something of an intense month.

Firstly it’s Scorpio season and Scorpio is a fellow water sign. In your chart, Scorpio rules all the good things in life such as romance, creative projects, children, love affairs and entertainment. This is the sector of your chart where you do whatever you find fun; it’s play rather than work.

Scorpio’s an intense sign at the best of times but since late 2012 the taskmaster of the heavens, Saturn, has been in this sector of your chart. Saturn ups the ante as it tends to be a heavy influence adding gravitas and a seriousness to your endeavours and sometimes Saturn plays out as a lack.

If romance has been scarce in the last year or two or if you’ve been finding it difficult to fall pregnant, Saturn can be the culprit. It can block you and make life harder than usual.

The good news is that Saturn is on the way out and come December 23rd, Saturn will leave Scorpio but not without reminding you of its legacy and influence on your own life. This is a heavily Saturnian month as Saturn connects with three of the personal planets, Venus (love), the Sun (self) and Mercury (communication) on the 13th, 18th and 26th respectively.

This is about bringing things to a climax, reaching the end of the road and getting ready to move on. It depends on your own personal situation what this means to you but the signposts and guide were last month when Mercury turned retrograde in Scorpio on October 4th and there was a Solar or New Moon eclipse in Scorpio on October 23rd. Look back to those dates and see what happened or what was eclipsed that fits the symbolism of love, children, creativity or entertainment.

You may be trying to end a romance that’s been dragging for some time, you may have had a tough couple of years parenting and would like things to be easier or you may have been working on a creative project or have a hobby that you’re on the verge of giving up. This month is crunch time and it’s important to make a clear decision about what next. Don’t forget too that Saturn rules the C word, commitment, and when Saturn’s dominant you need to decide whether to commit or quit.

The most powerful period of the month with regard to these areas is the 6th when there’s a Full Moon which cuts across the Scorpio/Taurus axis of your chart and the 10th when Mercury returns to the same place it was in the heavens when it turned retrograde on October 4th. This is your chance to try again or to restart a conversation that began over a month ago. You need to make things final and look at what you want to be taking into 2015 and what you want to let go of and move on from.

Relationships are especially powerful now as Mars, the action and passion planet, is in your opposite sign of Capricorn ruling personal and professional partnerships. This adds intensity and emotion to love and it really does feel as if the month is building towards something quite momentous.

The key period for Mars is mid-month as Mars clashes with the Uranus-Pluto square on the 10th and 13th respectively. This is nothing new as these two planets have been in conflict for a few years but they could trigger a repeat problem or an old issue and it may be linked to your own vocation in life or your partner’s career.

If your partner works away from home a lot or work takes over or some other issue to do with work, e.g. unemployment, this is likely to flare up again in the middle of November. Life is certainly raising the heat until you get the message that’s specific to you.

It can’t be denied that Mars in Capricorn feels extremely passionate so you may meet someone this month who turns your life upside-down and very quickly you need to make a big decision about what next.

More likely than not, however, this is about sorting things out within a long-term or current relationship. The end of a year is always an important symbolic marker and you want to go into 2015 happy in the knowledge that you’re in the right relationship or ready for the next phase in life.

Work and health matters pick up speed from mid-month onwards when first Venus enters Sagittarius on the 16th followed by the Sun on the 22nd and Mercury on the 28th. There may be extra work coming your way on the run up to Christmas and any kind of freelance or part-time job fits the bill.

The New Moon on the 22nd also falls in the sign of Sagittarius and this is a brilliant date to apply for a job or start a new work project. New Moons are about creating intentions and setting plans in place to carry you forward and on to the next stage.

For some, this emphasis on Sagittarius is a sign that you’re socialising more with people you work with and having a lot of fun into the bargain. You may feel inspired to get fit or look after your health.

Sagittarius is a sporty and energetic sign and anything that boosts your vitality and energy levels is highly recommended. Vitamins, tweaking your diet, alternative treatments. etc. Boost your looks or your health in time for the Christmas parties and traditions.

Certainly the second half of November feels livelier and once you’ve made a key decision regarding love, children or a creative project, you may well breathe a huge sigh of relief.