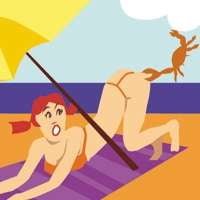 It’s all go as the month of November begins with not only a solar eclipse in your fellow water sign of Scorpio but another round of the Uranus-Pluto square which has been playing out in the heavens from 2010 and will continue to do so until 2015. Next round, ding, ding!

The solar eclipse is powerful for you being in the sign of Scorpio and eclipses often bring what’s hidden to light. Solar eclipses are essentially a New Moon, a chance to sow seeds, initiate action and start new beginnings but they have an extra oomph due to their connection with the Moon’s nodes, the karmic points in the heavens.

Scorpio is the sign that rules your creativity, children and love affairs. It’s the sector of your chart that focuses on fun, entertainment and the good things in life. It’s deeply pleasurable. If you’ve been hiding your true feelings or desires, here’s a chance to express them and let them see the light of day.

The theme of events emerging from the shadows continues as November progresses as Mercury, planet of communication, is retrograde or hidden until the 10th when it turns direct. This signals new information coming to light again with regard to the areas mentioned above; your creativity, self-expression, romance and children. New developments may come thick and fast bringing lots to talk about and new ideas. You may find yourself feeling truly inspired so be open to new experiences and try new things out. Take a course, develop an interest, start a hobby and let the new you emerge from the depths.

This month’s stars feel intense with a strong emphasis on the depth sign of Scorpio but progress can be made. Ordinary’s not enough now and you need to embrace whatever for you makes life extraordinary and special.

Relationships are one area of your life that are currently under the cosmic radar with a stack of planets in your romance sector including hands-on Saturn and Venus, the love planet, moving into Capricorn and your relationship sector on the 5th. Venus will remain in this part of your chart for an unusually long time until early March 2014 as Venus turns retrograde just before Christmas.

For now, however, it’s full steam ahead with regard to love so make those heart-to-hearts happen and ‘up’ the romance factor in your personal life. Love too is not lacking intensity but this is an important time to reassess where you’re heading and why. If you’re happy in your marriage or relationship then spend a little extra time and effort getting things right to strengthen the bond between you. If you’re unhappy, examine your relationship carefully and see what you can do to repair and mend whatever’s broken or to admit when it’s time to move on.

At the beginning of your horoscope, I mentioned the Uranus-Pluto square and on the 15th Venus clashes with these two titans of the heavens. This is a dynamic combination which requires courage in order to transform your situation. Pluto can break things down and often symbolises loss or things that are past and behind you and Uranus is a spontaneous and impulsive energy. Put the two together and it calls for a dramatic love life whether you’re bobbing back and forward between an ex and your current partner, you and your other half have called it a day or you’re experimenting with being single, being married or somewhere in between.

Anything goes with this combination and it’s not an easy scenario for a home-loving, security-conscious Cancerian who’s often happiest snuggled up with family feeling safe and loved. What is important is that you do whatever’s necessary now to get things right and have the courage to act to ensure your own needs are met. For some of you, this includes thinking of your children too and looking after them.

Pluto can represent the devil in disguise and be about temptation and if you’re being tempted, you’ll already know that it’s hard to resist. November’s not without it’s delicious moments and the 12th and 28th look especially pleasurable but do consider what’s best for you in the long-term. Jupiter in your own sign of Cancer until next summer is a protective influence and reminds you that ultimately you’re happiest when you have a safe base and a place you can call home.

Finally, the Sun’s move into Sagittarius on the 22nd puts work back on the agenda and once more you’re asked questions about how to find the right rhythm at work or the lifestyle that works for you. Take note of what happens on the 30th as a lucky opportunity lights your way forward.