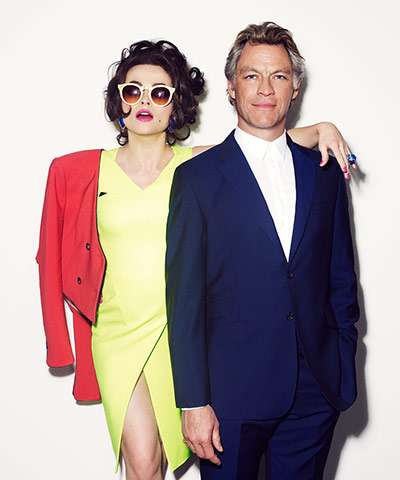 In Saturday’s copy of the Guardian magazine, under the heading True Romance, an article about the 2014 movie starring Helena Bonham Carter as Elizabeth Taylor and Dominic West as Richard Burton was the following byline: Shrinks, astrologers and a pilgrimage to Pontrhydyfen.

Now it’s not often you see the term ‘astrologers’ in a mainline publication without it being used in a derogatory way so this definitely grabbed my attention. Here’s the transcript of the relevant text:

How did they prepare? “I went to an astrologer,” Bonham Carter says. She looks at West and bursts out laughing. “He thinks I’m barking. Heeheehee!” Bonham Carter laughs louder and more giddily than almost anybody I’ve met. “I’ve got a really good friend called Darby Costello. If I can’t make a decision, I go to Darby and… she won’t tell me what to do, but she can distil characters. She knew Elizabeth.” She stops to correct herself. “She’d not actually met her, but she’d distilled her. She said that Elizabeth was a big Pisces, and was often attracted to people who were broken – she needed to heal them. This was her take on Burton: when she got down, she always had the capacity to get up, whereas he was laden with guilt, and obsessed with death. She was so Pisces.”

What does that mean? “A lot of water. She was so liquid, so sensual. Burton called her ‘Ocean’. Truman Capote talked about her liquid eyes, the way she moved. It was also the drink. That was her element. She existed on a different planet.”

West remains silent and wide-eyed as she talks, and she’s still looking at him. “Look, he thinks I’m a nutter! I said to Darby, can you just see if would have got on? And the first thing she said about me and her was that she would have felt very safe with me. She said there were five houses between us.” Eh? “Basically, from the moment you’re born, all your moons stop in certain houses.”

Well, apart from the last sentence which lost me too, how brilliant is that? Darby Costello is a highly-esteemed astrologer and I think Helena Bonham Carter and the Guardian are both amazing for sharing and printing the above piece.

Totally true about Taylor’s Piscean qualities and Burton was a deeply intense Scorpio so they were made for one another. They were star-crossed lovers the moment they met on the set of Cleopatra in 1963 and theirs is one of the greatest contemporary love stories, albeit a little messy, scandalous and unpredictable.

Burton & Taylor the movie is being made for the BBC which will be released in 2014. It’s got to be better than Liz & Dick last year’s movie about the famous couple starring Lindsay Lohan and Grant Bowler which was heavily criticised. The title’s a notch up for starters and the acting talent is likely to be greater.

Helena Bonham Carter has come under fire for not being sufficiently beautiful to play Elizabeth Taylor and Dominic West has been put down for not being sufficiently Welsh or charismatic. Looking at the photos that are out, in some of the shots Bonham Carter looks remarkably like Elizabeth Taylor although I have to say Dominic West isn’t doing it for me as Richard Burton. He’s not smoldering enough for the camera. Still, the film’s on my watch list and I’m looking forward to seeing it next year.