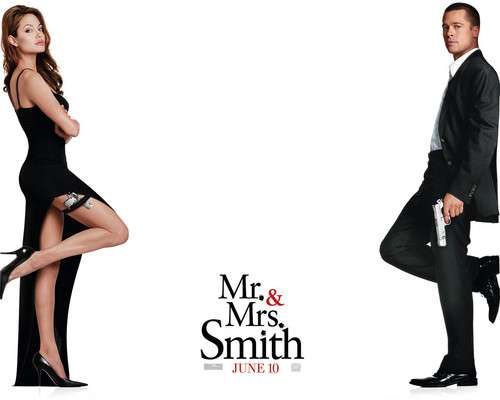 One of the most famous couples in Hollywood known affectionately as ‘Brangelina’ split this week after 12 years together. That couple is of course Brad Pitt and Angelina Jolie.

They met and fell in love on the set of Mr & Mrs Smith (2005) whilst Brad was married to Jennifer Aniston. Brad & Angelina are a couple I’ve written about numerous times, in particular trying to predict when they would marry. My second attempt was close, predicting their union when Angelina had a stunning Jupiter transit in July 2014 conjunct her natal Venus, the planet of love, on her Cancer Ascendant. Brangelina was made official the following month, August 2014.

Brad & Ange are a couple who have stunning synastry between their two birth charts so it’s no surprise that they shared a strong mutual attraction. Their astrological synastry includes one of the classic marriage indicators, one of the lights, i.e. the Sun/Moon conjunct the Ascendant/Descendant axis of the other person’s chart.

The Descendant is the relationship point in astrology and Angelina’s Sun at 13 Gemini 25 is conjunct Brad’s Descendant at 11 Gemini 54. Add to this the fact that Angelina’s Sun is opposite glamorous Neptune at 10 Sagittarius 20 which means it’s closely conjunct Brad’s Ascendant at 11 Sagittarius 54 and this is a seductive and alluring combination.

So why’s it all gone wrong? Well to be fair, Angelina seems to have thrown the whole book and then some at Brad. She filed for divorce on September 19th 2016 citing irreconcilable differences but there’s also been rumours of an affair between Brad and Marion Cotillard, his co-star in his latest movie, anger management issues and parenting differences of their 6 children.

The Role Of Saturn

The astrology is telling and the main culprit is Saturn, the planet that can be a real downer. All year, Saturn in Sagittarius has been hitting the key synastry between the couple hard, conjunct Brad’s Ascendant and opposing Angelina’s Sun.

Saturn is linked to endings and more important perhaps, it’s a reality check. One of the main issues for Hollywood couples is the fact that their lives are based on glamour and fame, which is why Neptune is invariably a strong player in actors’ charts. How to keep love alive once the honeymoon phase is over seems to be a bigger challenge for the glamorous set than everyday people. To be fair, Brangelina’s had a good run in Hollywood terms.

So what about the alleged affair? Is it likely to have been the catalyst for their marriage breakdown? Marion Cotillard, b. September 30th 1975, 4:50am, Paris, France is a Sun Libra. So in a few weeks time Jupiter will be conjunct her Sun bringing her into the limelight [n.b. I read that she might be pregnant – that would fit her Jupiter transit!]

Her main astrology this year has been Uranus going back and forth over her Mercury/Jupiter opposition, Mercury at 23 Libra, Jupiter at 21 Aries. Mercury is her ruling planet, Jupiter is her partner planet and Uranus shakes things up.

Plus Marion also has Saturn transits taking place this year. She has Neptune at 9 Sagittarius 26, which is the exact same synastry with Brad as Angelina, i.e. her Neptune conjunct his Ascendant. The allure is most definitely strong between them and with Neptune conjunct Marion’s IC, the point in the chart which rules your foundations, this is going to be an unsettling time for her.

There is one more woman to consider in all of this, Jennifer Aniston, b. February 11th 1969, 10:22 pm. Los Angeles, California, USA. A Sun Aquarius, the girl next door and one of TV’s favourite ‘Friends’. Many people felt she had the right to feel aggrieved when Brad effectively dumped her for Angelina.

Jen’s current astrology is intriguing because revolutionary Uranus is close to her Descendant at 24 Aries 40. She also has joyous Jupiter transits coming up very soon as Jupiter is first conjunct her Uranus at 3 Libra on September 25th 2016 followed by her Jupiter Return, 5 Libra, on October 3rd 2016.

Both planets are opposite her love planet Venus at 9 Aries. All this astrology feels freeing, releasing for her and there’s not a hint of Saturn. You get the feeling that someone might well be throwing the cosmos a celebratory high five. 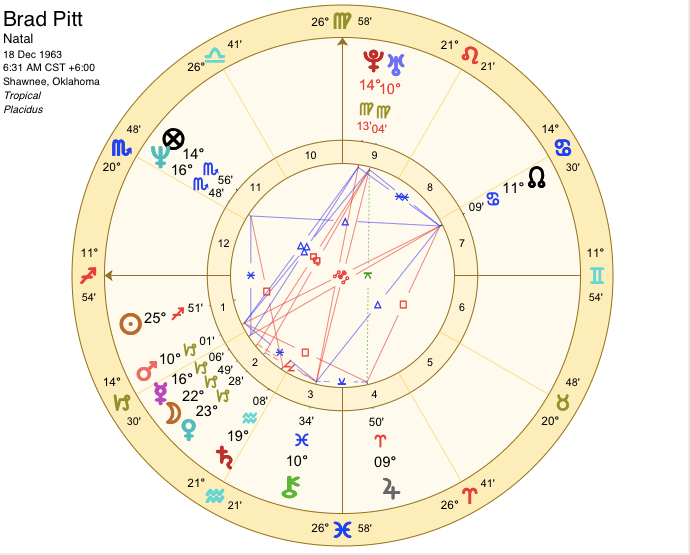 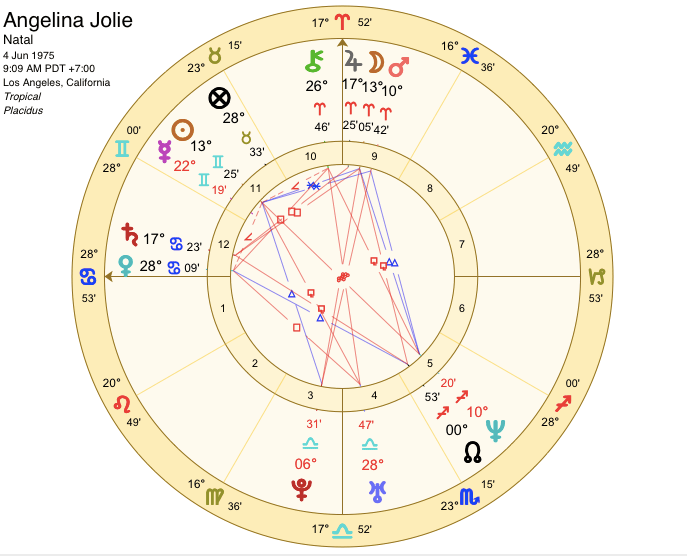 If you wish to know more about Brangelina’s astrology, here’s a link to a link, Angelina Jolie, Brangelina & A Summer Wedding? which also directs you to a comprehensive article I wrote for Horoscope Friends about the couple.

Nb: Brangelina have other tricky astrology this year too most notably they both have Pluto oppositions to their ‘partner planets’, i.e. the planet which rules the Descendant. Like Saturn, Pluto is often a symbol of endings and isn’t known as the ‘wipe out’ planet for nothing. Plus, the day after Angelina filed for divorce, Uranus, the planet of splits, was at 23 Aries 28 exactly square Brad’s love planet Venus at 23 Capricorn 28. It looks like there can be no going back.