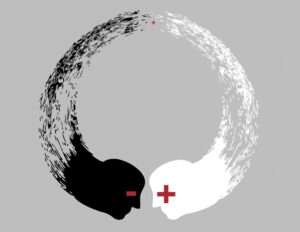 Every Sunday morning, the Weekly Astrology newsletter pings into my inbox, as a confirmation that all the weekly subscribers have received their newsletter on time.

Last week’s newsletter stopped me in my tracks. I’d just been listening to the news of another terrorist attack in the UK, this time in London, a city I lived in for 15 years and still visit on a regular basis.

The title of my newsletter: ‘Best Day Ever’! The way I was feeling, it should have said, ‘Worst Day Ever’!

So more terror in our world, more people whose beliefs spur them on to commit violence & incite hatred. Often clients and friends ask whether these events are mirrored within astrology and more often than not the answer is Yes. One of the basic premises of astrology is that what’s happening within the universe is mirrored on earth, hence the saying: ‘As above, so below’.

The chart of the astrology for the time the terror attack began last weekend (see below) shows the two malefic planets, Mars and Saturn, cutting across the angles of the chart.

Saturn in Sagittarius, the sign linked to religion & belief, conjunct the Ascendant opposing God of War, Mars, in Gemini on the Descendant. The axis of self (Ascendant) v. the other (Descendant). Me versus You.

Gemini & Sagittarius, both zodiac signs that focus on how we understand and make sense of the world, including knowledge, information, our belief systems.

Mars was at 29 degrees on the day of the attack. As there are 30 degrees in each zodiac sign, it was about to change signs. 0 and 29 degrees are noted as the most potent degrees in a sign, the beginning and end of each sign, active & hot.

Plus both planets, Mars and Saturn, are connected to Venus making her final planetary aspect before leaving Aries, the sign ruled by Mars, God of War. Venus moved on a few days later, moving into a more nurturing, softer influence, the earth sign Taurus.

In the chart, Venus is conjunct unpredictable Uranus close to the IC, the base, our home, our foundations, shaking us to the core. Uranus often shows as the trigger, the unknown element, but without a context, Uranus is neutral. You know there will be something unexpected, but will it be a good or bad surprise? For example, Venus/Uranus planetary connections can also symbolise meeting someone and falling madly in love.

What is also striking about the chart for the time of the attack is that it took place during the monthly Moon/Jupiter conjunction in Libra, the sign of relationships and peace. In addition, the Sun in Gemini is making a positive trine aspect to Jupiter, a planet that at its best represents good fortune, hope and faith.

For me, this symbolism feels more like the amazing ‘One Love Manchester‘ concert which took place the following night. This united people in love and hope and the music and performances were heart-opening. My daughter and I watched it the whole way through and it was a powerful demonstration of love, peace & happiness.

Yet what I also realised looking at the chart showing the astrology for the moment of the attack was that this astrology belongs to all of us. It’s not different for a terrorist, a victim, a performer, a member of the audience. It belongs to each and everyone of us, although it is expressed through us in different ways.

Even though this is difficult to write, the Moon/Sun/Jupiter connection exact at the time of the terror attack on Saturday night would have been true for the terrorists. Jupiter is linked to faith and terrorists are, presumably, taking action because of what they believe in and are willing to die for their cause (Mars/Saturn).

We All Live Under One Sky

What feels good or celebratory for one person feels bad or terrible for another person. We are all different and we all have our own values and beliefs. Some people strive for war, power, dominance whereas others share a longing for togetherness, community and peace on earth. Some people choose love, some people choose hate.

I don’t profess to have any easy answers for how you bridge that gap. It does however feel important to acknowledge that as a world nation we don’t all want the same thing and we have opposing views on life events.

How we communicate and live together knowing that and learn to listen to one another is a big ask, but surely one that’s worth aiming for. Ultimately, we all live under the one sky. 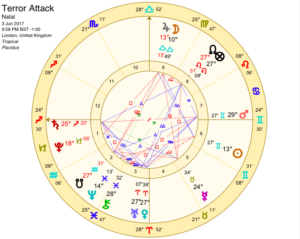