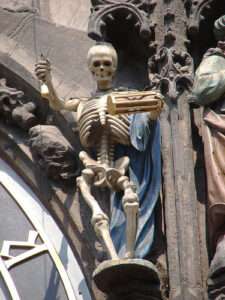 Death on the Astronomical Clock, Prague

I was sent a link to an indian astrology site yesterday which I decided to take a quick look at. I love the differences between Indian (vedic) and Western astrology and India is a country that I have visited twice and both times fell in love with. The site included the usual links to astrology, compatibility, matrimony, numerology, palm-reading and so on. However, I stopped completely in my tracks when I saw a link entitled, “The Death Clock”, which went on to say, “Conquer the most perplexing uncertainty in life, your death. Then rest in peace…”

This could only be acceptable in a country like India, where the culture is so different to western society and the people often have a fatalistic view on life. This was made very clear to me when I took an internal flight across India in 1988 and one of the articles included in the inflight magazine was “Top 5 Reasons Of Airplane Crashes”. This is not the best read for anyone who’s a nervous passenger, although it was strangely compelling and, if I remember rightly, no. 1 was birds flying into the propeller.

My second encounter that highlighted the difference between our cultural attitudes towards death was on the night bus from Delhi to Srinigar, Kashmir. This is not a journey for the faint-hearted. Firstly, it takes 24 hours; 14 hours from Delhi to Jammu and 10 hours from Jammu to Srinigar.

Secondly, the last part of the journey is along an amazingly windy road high up in the hills with the most breathtaking views but the roads are terrifying. They’re narrow, they have no barriers, the mountain is forever crumbling away so there are rocks and debris strewn across the road. It’s dusty, the tyres swerve and around many of the sweeping corners, you glance down and see the wreck of a car or coach that never made it.

This journey is famous for its wonderful road signs, some funny and some fated. The few I can remember are: “Better To Be Late, Than Late Mr”, “After Whisky, Driving Risky”, “Life Is Short, Don’t Make It Shorter” and “Don’t Dream, Otherwise You Will Scream.” Our fellow indian travellers took it all in their stride, most of them getting a good night’s sleep whilst I wrung my hands nervously and counted down the hours until we arrived at our destination. Of course, they believe that if your “time’s up”, then that’s the way it is, so why worry. 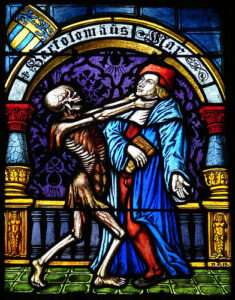 It seems apt that I read about the Death Clock at this time as today the Sun is square Pluto and tomorrow the Moon is opposite Pluto. In mythology, Pluto was God of the Underworld, death’s realm and in western astrology, Pluto not only symbolises death and loss but power, hidden riches and transformation. I should add that having been brave enough to click on the link to the Death Clock and having first been told “It’s Your Final Countdown”, I did see that this isn’t based solely on a prediction from your birth chart but asks you to answer numerous questions on health and lifestyle. At the bottom comes the disclaimer, “for entertainment purposes only”.

I shan’t be delving into the Death Clock any further, although if you wish to do so, you can find the link at www.findyourfate.com. I believe that astrology has a higher purpose than predicting death or ill health and that its beauty and magic lies in helping people have a clearer and deeper understanding of themselves. It’s about empowerment and growth and encouraging people to take the best possible course of action in their lives.

Now if I was born in India, I might have a completely different view on astrology and fate and that’s fine too. It’s our cultural differences that are so fascinating and perhaps the more time we spend trying to understand each other and appreciating one another’s differences instead of judging who’s right and who’s wrong, the better our world. So with Pluto strong today and tomorrow, see where in life you can “let go” instead of trying to control or manipulate another person or situation. Look below the surface to gain a deeper understanding of yourself and others.