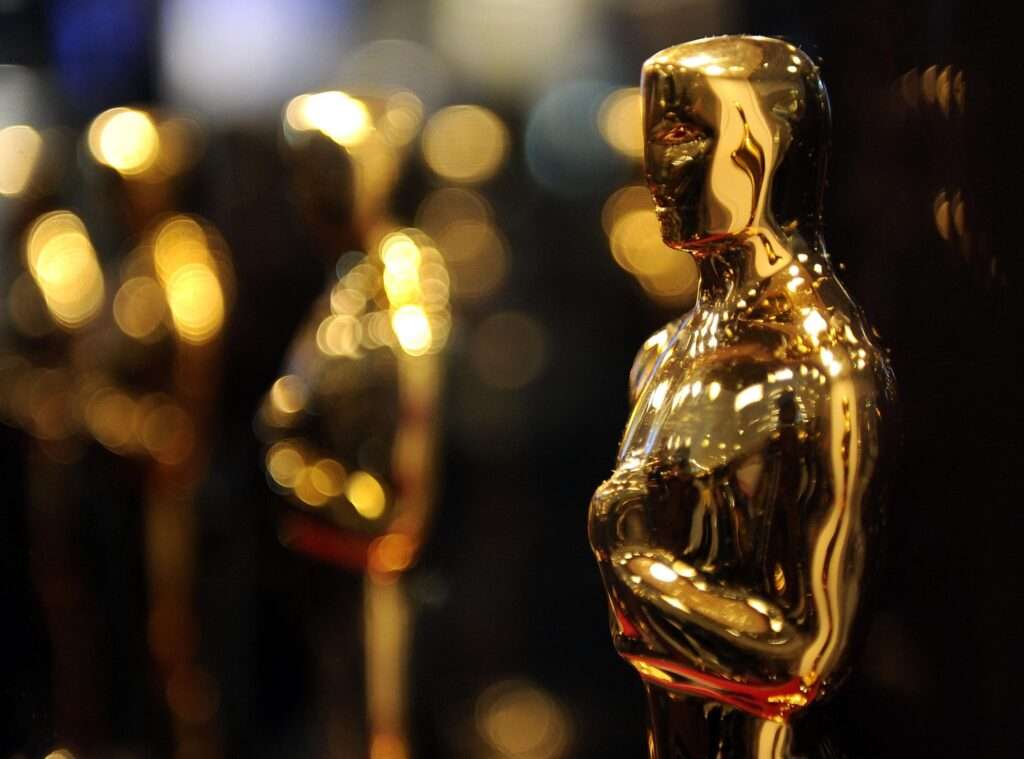 Update: What an ‘eclipse’ moment. La La Land is announced Best Picture only to find out that it was the wrong envelope and the right winner is Moonlight. So the hyped movie (Neptune themes) is ‘eclipsed’ by a movie about self-discovery and connection!

Happy with this year’s predictions. Kenneth Lonergan (see Best Director below) did win an Oscar for the Best Original Screenplay. The only actor who didn’t win was Isabelle Huppert and I’m sure if there was a Drama Category v. a Musical/Comedy Category, she would have repeated her win at the Golden Globe Awards.

Unsurprisingly it was a politically charged ceremony, plus actress Meryl Streep was caught up in a pre-Oscars controversy about a dress and received a tribute on the night.

Oscar season is here and the 89th Academy Awards take place on Sunday 26th February 2017. The chart for the Oscars is at the bottom of this article but a quick recap of our current astrology shows that this is a potent date for one of the film industry’s biggest events of the year.

Firstly, there’s a solar eclipse in Pisces and eclipses tend to bring what’s hidden to light. This eclipse sits next to Neptune, the planet linked to the movies so perfect for a Hollywood showdown. Eclipses are often linked to drama, the highs and lows of life.

The 2017 Oscars are being hosted by Jimmy Kimmel (b. November 13 1967). Born on a Sun/Neptune conjunction in Scorpio, he’s in tune with the Neptunian feel of this year’s big event.

As there are likely to be some significant surprises this year, perhaps it makes it harder to predict who will win from an astrological perspective. Yet there’s some interesting astrology so here goes:

This is one hot category with three of my favourite actors in with a shout. Three of the actors, Andrew Garfield, Ryan Gosling & Casey Affleck all have natal Neptune conjunct their Midheaven, the career point in the chart. They were born to be movie stars.

Viggo Mortensen was born on a Sun/Neptune conjunction. He is a Sun Libra and Jupiter, the lucky planet, is currently in Libra although retrograde, i.e. retreating through the zodiac. Transiting Jupiter lights up his natal Venus at 21 Libra. With no time of birth for his chart however, we don’t know whether this is about his career or love.

With a Sagittarius Midheaven, Jupiter is Casey’s career planet and it’s at 24 Aries opposite Uranus at 28 Libra in his birth chart. He’ll be very unlucky if he doesn’t win, although the Mars/Uranus conjunction at 22 Aries is already stirring up trouble for him if you read the media.

Emma Stone is the favourite to pick up the Oscar. She was born on a Sun/Pluto conjunction in Scorpio, which gives her tremendous focus and power. Plus she has a Moon/Venus conjunction at 7 and 8 degrees Libra respectively. So far she’s won all the awards for her role in La La Land when Jupiter was in earlier degrees of Libra. Is her run of success over for now?

One to watch is Isabelle Huppert. A Sun Pisces, she’s in tune with the Pisces vibe of the Oscars. Plus her Midheaven, career point, is 22 Libra so Jupiter is transiting the success point in her birth chart right now. In addition, her natal Mars is at 26 Aries making her a strong contender to win and deliver a punch.

Yet the real activist is Meryl Streep, no stranger to Oscar wins. She might be a Sun Cancer but as Uranus is within 1′ of a conjunction to her Sun, she is no stay-at-home Mum! Uranus rules Aquarius, the sign most closely linked to a strong social conscience and Meryl’s Jupiter is in Aquarius on her Descendant. She’s principled and will use her position in society to speak out. Uranus has been activating her Midheaven at 18 Aries for some time now and she used the platform of the Golden Globes in early January to speak out against Donald Trump.

This category includes the youngest – Lucas Hedges – and the oldest – Jeff Bridges – nominees of the top categories. It’s a trickier category to predict because there’s only a time of birth in the public domain for Jeff Bridges.

Michael Shannon is a Sun Leo who’s in the middle of his Uranus Half Return. This can often spring surprises.

Yet the best astrology by transit is for Mahershala Ali and he is the favourite to win. Born with lucky Jupiter next to his Sun Aquarius, he has communication planet Mercury at 11 Pisces so he’s currently experiencing a Neptune transit. As Neptune’s vibe is currently strong, he’s in tune with the zeitgeist.

Again there’s only public information about times of birth for two of the actresses, Nicole Kidman and Michelle Williams.

There’s already been controversy in this category because the hot favourite to win is Viola Davis and it’s been queried why she wasn’t in the Best Actress category. This is her third nomination and a Sun Leo, it could well be her time to shine. Her natal Mars is at 24 Libra so the powerful Jupiter-Mars-Uranus combination is close to this planet.

Octavia Spencer will celebrate her Jupiter Return later this year as Jupiter is at 27 Libra in her birth chart but the current transit is slightly wide to be powerful now. However, her Sun is at 4 Gemini and conjunct the Midheaven for the Oscars 2017 birth chart (see below) at 3 Gemini, so she’s in with a shout.

Damien Chazelle is the favourite to win the director’s category. He has lucky Jupiter next to his Sun Capricorn in his birth chart.

Yet there are two Sun Libra nominees and the one to watch astrologically is Kenneth Lonergan. Born on October 16th, his Sun is at 22 Libra so Jupiter is transiting back over his Sun during the Oscars. He also has natal Jupiter at 3 Pisces, the same degree as the South Node and he would be unlucky to lose with such a glorious Jupiter transit.

La La Land received the most Oscar nominations – 14 – an accolade it shares with the movies Titanic and All About Eve.  A fantasy musical about Hollywood – this ticks all the Neptune boxes; fantasy, music, romance, Hollywood glamour.

The other contenders that fit the eclipse/Neptune symbolism are Manchester By The Sea – Neptune rules the sea – and Moonlight – WINNER – a solar eclipse takes place when the Sun & Moon sit side by side.

Both Hacksaw Ridge and Hell Or High Water pull in the Mars symbolism too. The public’s favourite is Hidden Figures which would be a surprise but popular choice. 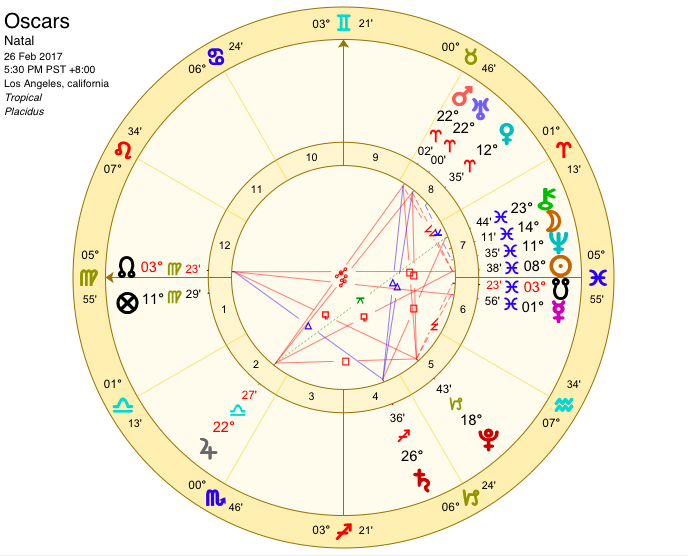