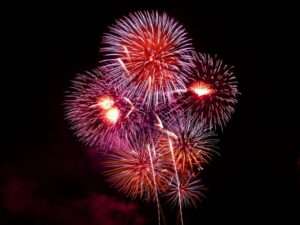 As 2015 begins you’re raring to go as the theme of change sweeps into your life. The first major aspect of the year falls on New Year’s Day between your ruling planet Mars in opposition to the far-and-wide planet Jupiter.

Mars is action and energy and Jupiter wants to expand what it touches. This is about grasping new opportunities, reaching that little bit further to go above and beyond your comfort zone.

For some, New Year’s Day will be the time to think what next with regard to hobbies, friends, leisure activities and the energy is dynamic and exciting for joining a new group, networking and making the most of your skills and talents. It doesn’t necessarily matter what you do but think back to the activities you enjoyed as a child and see if there’s something you miss doing, something that you would like to learn or try again.

Jupiter’s in Leo and the most creative sector of your chart so focus your attention here and commit to learning a language, an instrument or design a vision board for your year ahead, whatever appeals to you personally. Jupiter remains in Leo until August 2015 so whatever you decide to begin or recommit to, think of this as a project that will take you into the middle of the year.

The other major astrological event in January also takes place early in the year as there’s a powerful Full Moon on the 5th. The first weekend of the year brings up themes that have repeated in your life for some time, perhaps since 2012. The Full Moon cuts across the Cancer/Capricorn axis of your chart so this is about your work and your lifestyle; your home and family. Plus the Full Moon picks up the Uranus-Pluto square and Uranus is in your sign of Aries.

Doing things traditionally or conventionally has been difficult with this combination and once again you may be trying to change your current work situation perhaps to work from home or follow a more unconventional work path. Sometimes you have to keep pushing or fighting for what you want and emotions may well run high early in the month.

The truth is that this month is all about doing things differently, experimenting and in some shape or form following your own agenda rather than being dictated to or doing what others feel is right for you. The beginning of a new year is as good a time as any to focus on you and your own wants and needs. You can’t go it alone in as much as you need support and will benefit from being around people of like minds for advice and inspiration but this is about you and what you want to do with your life.

Timing is the key to success in January and the turning point comes mid-month when there’s a New Moon in the sign of the individual, Aquarius, on the 20th followed by Mercury’s change of direction in the same sign the next day. Mercury retrograde puts in an early appearance in 2015 and is on go slow from January 21st until February 11th. Make your key moves early on in the month, especially with regard to friends, groups, social concerns, etc. but then be patient and know that you may have to undergo a period of confusion or misunderstandings before the fog clears and you find your way forward again mid-February.

This whole month feels as if you’re grappling with the big questions of life and you’re right to do so. Mars your ruler enters Pisces and the most hidden sector of your chart on the 12th and whether you’re exploring a spiritual path or you want to address the big issues in life, your attention turns inward.

At times you may feel as if you’ve lost your way but it’s by going through a period of unclarity or confusion that the answers come to you eventually. Learn patience, let go of any desired outcome, let things and people be. This will feel frustrating at times for a speedy Aries who wants everything to happen right now but view this as a lesson in acceptance and slow down the pace of life.

Use this period to do research, study, plan ahead and know that this year in general is perfect for big and bold moves. The trip of a lifetime, a sabbatical, going back to school, exploring your spirituality; whatever rocks your boat, use this first period of the year to explore your options further and be ready to act decisively once Mars enters your sign of Aries on February 20th. The spring equinox which takes place the following month, March 20th, is your time of year to start afresh, launch a new project and get your teeth into something new and exciting.

If you’re looking for love, focus more on friendship for now and get to know someone well better before you take things further. Expand your social circle and seek out intellectual or cultural stimulation, new ideas, new interests and plant your flag amongst your tribe. There’s a lot of fun to be had in January and it all starts by reaching out to others and exploring new options. Be a joiner, seek out new people and let yourself be inspired.