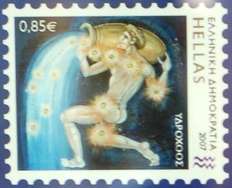 Happy birthday, Aquarius, if you’re February born. This month’s stars promise a great deal especially early in the month as Venus, the planet of love and beauty, moves into your sign on the 2nd where it remains until the 26th.

Venus in your sign puts the focus on your appearance, and it’s often a time when you want to look good and feel healthy. Beauty is not only skin deep, despite the saying, and what’s most important is how you feel inside and how that changes the way you approach the world and interact with others.

Venus in your sign brings the feel-good factor to your life and that can never be a bad thing. It’s great for celebrations, getting together with people you love and socialising and having fun. Circle the 6th and 7th for good times when Venus teams up with Uranus and Jupiter respectively, the planets of adventure, spontaneity and new experiences. If you’re looking for love, Venus in your sign adds an attractive quality, a magnetic attraction and when you smile, people smile too. It enhances your popularity which is a win-win situation in many areas of life.

This is a good month to lead the way in love and put the sparkle back into a relationship. If you’ve been especially busy at work of late, then make an effort to create some quality time for the two of you, whether it’s a date night or a weekend with no disruptions.

If there are any problems between you, these may be highlighted on or around the 11th when Saturn squares Venus. This often shows some kind of lack in love or a fear of expressing your true feelings. Be aware of this energy and notice if you’re held back or you let other distractions, such as technology, get in the way of real one-to-one interaction. If your work, lack of it or too much, affects your relationship, this is when the problem is likely to show but at least you have a chance to deal with the matter head-on and find a way to sort things out that suits both of you. This aspect comes the day after a New Moon in your sign of Aquarius which is always a great time to start new beginnings and set some intentions in place.

Saturn is one of your ruling planets and it has been in your career sector since last October. For some, last month’s stars will have seen you particularly busy and under stress. That should start to ease this month as Saturn is slowing down and on the 18th turns retrograde. This weakens the planet and effectively this should mean you’re off the hook whether a difficult boss isn’t quite so difficult or you have a lighter workload or a clearer sense of your career direction.

Saturn does offer you the ability to be disciplined and organised but it’s a heavy-weight planet that often brings obstacles or roadblocks. The 12th, 15th and 16th look especially helpful when Saturn trines planets in Pisces and your money sector. This is good news if you want to sort out your finances, earn more and put new structures in place that help you save and plan for the future.

When it comes to money, there is a sense of urgency in getting things sorted. Mars, the planet of action, moves into Pisces and your money sector on the 2nd where it remains until 12th March and on the 23rd, Mercury, planet of communication, turns retrograde in this same sector and only turns direct on 17th March. So act fast whatever your current financial situation and whatever it is you want to work on.

The planet Neptune is also in Pisces and make connections with key planets on the 4th (Mars), the 6th (Mercury), the 21st (the Sun) and the 28th (Venus). Neptune can bring inspiration and is a creative energy so it’s great for dreams and schemes but it’s not the best planet for being constructive or making things happen. It can mean that you feel as if you’re approaching life through a fog and you may be uncertain or unsure when it comes to money.

Neptune is the planet of deceit and scandal so it’s wise to keep money matters above board and anything that smacks of ‘a scam’ should definitely be avoided. Trust your intuition when dealing with money, don’t let matters drift and keep your business head screwed on. If in doubt, put off any major decisions until mid-March when new information will come to light and the path ahead will open up with clarity.