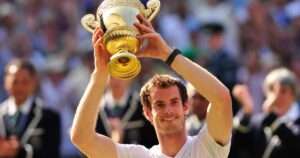 Andy Murray is without doubt the UK’s most successful tennis player of recent times. This month, November 2016, he finally took the much-coveted World no. 1 spot off Novak Djokovic who held the no. 1 ranking for the past 122 weeks.

What’s interesting about this astrologically is that Andy Murray (b. May 15 1987) turned 29 earlier this year. This means his achievement comes in his Saturn Return year and this is quite late to hit your best in the world of tennis. Saturn is the planet of discipline, authority, mastery and if you work hard and keep moving steadily towards your goals, the Saturn Return can deliver the goods.

Andy Murray is a Sun Taurus, one of the earth signs, and Taurus is renowned for its dogged persistence. The earth signs don’t tend to rush into life but instead keep moving steadily forward one step at a time, one goal at a time. This is how consistency, effort and sheer determination pays off.

Yes, it took Andy Murray longer to start winning the titles but in true Taurus style, he never gave up. He lost in four Grand Slam finals before he finally beat Novak Djokovic at the US Open in September 2012 and he infamously won over the public’s hearts when he cried after losing the Wimbledon final to Roger Federer a few months earlier. The dour Scot showed a softer side to his nature.

In his natal chart (see below), Andy’s Ascendant is Virgo, the sign of precision. This means the chart ruler is Mercury conjunct his Gemini Midheaven. He was born to succeed and Gemini is the sign most closely linked to top tennis players.

Plus, when you have the same planet ruling your Ascendant (self) and Midheaven (career) – Mercury rules Gemini & Virgo – who you are and who you become is one and the same. Andy Murray began playing tennis age 3 and 26 years later he’s at the top of his profession. His Sun Taurus tenacity keeps on paying off. 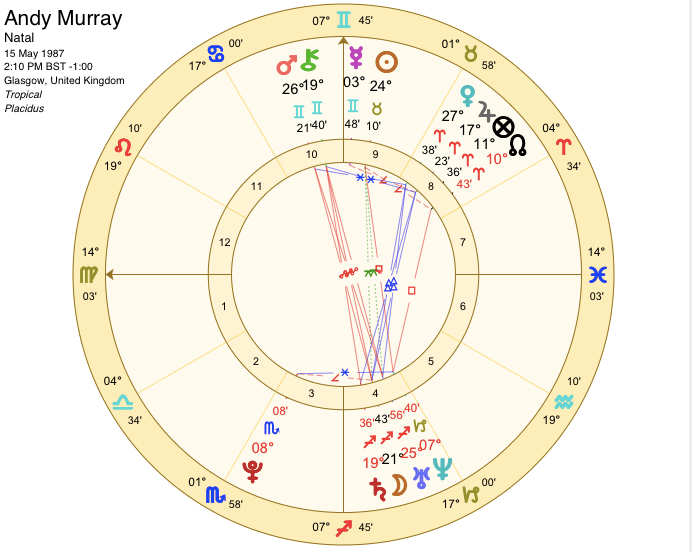