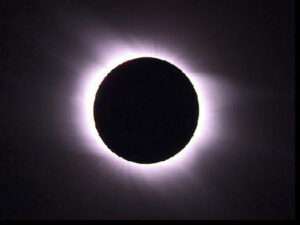 In our modern world, eclipses are the delight of scientists and eclipse chasers as much as songwriters and poets. There’s something awesome about a solar eclipse when the shadow of the Moon blocks out the light of the Sun. Flowers begin to close, birds go to roost and the natural world thinks night-time has arrived, whatever the hour.

Imagine what it must have been like thousands of years ago before man understood this natural phenomenon? No wonder ancient people thought it was the end of the world when the sky turned black in the middle of the day. Many myths developed in different cultures because of this magical phenomenon and a lot of them incorporated noise, shouting and drum-beating to scare away the angry Gods.

Various animals have been associated with eclipses over time by different cultures; the dragon in China and Thailand, dogs and coyotes for the North American Indians, the jaguar in South America. In India, it was Rahu and Ketu (the Indian names for the north and south nodes), and in Tahiti, they have a very romantic interpretation of an eclipse, that the Sun and Moon came together to make love and created the stars.

Eclipses can now be predicted using an eclipse cycle and eclipse chasers can happily spend their life savings as they dash about to catch the best photographs and sights around the world. Eclipses tend to occur in pairs, twice a year, and there are partial, annual, hybrid and total eclipses.

Amongst astrologers, there are mixed reviews on the symbolism of an eclipse. For some, it’s a power point, a time of heightened energy and spiritual awareness. For others, the eclipse is an omen, the lights go out and what is hidden emerges, just as the light of the Sun returns after the darkness. This brings with it dramatic events which change the course of time and thus the lives of key individuals.

Eclipses are famously linked with royalty, as the Sun represents the King in the heavens and the Moon the Queen. On the day that it was announced that Diana would divorce Charles in the UK, there was a powerful lunar eclipse in the heavens, beautiful symbolism for the King (Sun) and Queen (Moon) at opposite ends of the heavens with a shadow come between them. There would be no fairytale coronation and happy-ever-after for the two of them.

Eclipses often play a key role in celebrities’ lives and I will be blogging about this over the next few weeks. Perhaps this means that modern celebrities of stage and screen are the “new” royalty in the public’s eyes. We are often in awe of celebrities and some people live vicariously through them. We love a celebrity who comes from nowhere to achieve amazing recognition in the eyes of the public, and the media loves nothing more than chronicling their hubris, which often leads to a celebrity’s downfall.

In traditional astrology, it’s said that an eclipse lasts for as many months as minutes of the actual eclipse (never more than 7) and when an eclipse falls on a key planet in a country’s chart, dramatic change is foretold.

For you personally, an eclipse matters when it falls on a planet in your chart or an angle within two degrees.

Eclipses take place in cycles of star signs and we are currently in the middle of a Gemini/Sagittarius cycle, affecting these two star signs more than others.  The specific dates and degrees are:

In brief, here’s the area of life that this set of eclipses highlights in your solar chart:

Taurus/Scorpio: 2nd/8th houses – money, what you place value upon in your life; your joint finances, your sexuality, all that you share with others

Cancer/Capricorn: 12th/6th houses – retreat, quiet, solitude; your health & work, service, what you sacrifice for others

Leo/Aquarius: 11th/5th houses – your friends, groups & societies; your children, creativity, what you give birth to

Virgo/Pisces; 10th/4th houses – your career & vocation, where you’re heading in life; your home & family, where you come from

This Sunday night, 20th May 2012, there’s an annular eclipse at 0 Gemini. It won’t be seen in the UK but starts in East Asia, heads across the Pacific Ocean and on to the west coast of the USA. Have a read of my monthly stars to find out more about what this means for your star sign and if you want a copy of your birth chart to check whether this connects with your personal planets, the offer of a free gift to you is still valid. Send me an email with your time, date and place of birth.

Eclipse symbolism suggests one door closing whilst another door opens or one person loses out whilst another person gains. Traditionally you’re best to wait a few days after an eclipse before making major decisions or implementing big changes in your own life.

Eclipses are often concurrent with major events and turning points in a person’s life and remind me of the children’s game of “hide and seek”, when the seeker shouts, ‘coming, ready or not’. Are you ready for this weekend’s dramatic eclipse?