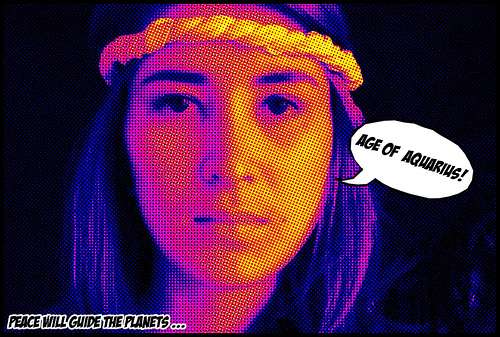 [This post first appeared on January 20th 2014. I’m reposting it exactly one year later to coincide with the Sun’s annual visit to the wonderful sign of Aquarius.]

So what do you need to know about Aquarius whilst the Sun is in this quirkiest of signs?

“The Aquarian is essentially a realist, even though his address is tomorrow, with a wild-blue-yonder zip code”  Linda Goodman

I saw the quote above recently on a Kepler newsletter and thought what a brilliant description it was for the unique sign of Aquarius. Linda Goodman published her huge bestseller Sun Signs in 1968 and it’s still so readable and relevant today.

Who Is Your Aquarius Friend?

Aquarius is the sign of the future and Aquarians are ruled by two planets, wacky Uranus and systematic Saturn. Aquarians can be a puzzle to identify with different facets to their personality but it’s one of my favourite signs and I love my Aquarius friends. They’re all individuals who lead their lives the way they want to and refuse to conform to convention. They walk the road less travelled and seek out their own path in life rather than following the herd.

It’s a strange conundrum that Aquarius is the sign that rules groups and the collective as most Aquarians I know are interested in doing their own thing. They dress differently, always have thought-provoking and often outspoken opinions and pride themselves on being different.

Where the sign of Aquarius does fit into the theme of the collective is through their friends as they like to find their own tribe in life and through their commitment to social, environmental and humanitarian ideals. They are sociable without being needy and even though I don’t see my Aquarian friends as often as I would like (as the majority of them live abroad), there’s a bond between us that remains unbroken. This is one of the fixed signs after all and they are loyal even though they often create space and freedom in their own lives.

Aquarians can be frustratingly logical to the point of being dogmatic, they can lose themselves in technology and come across as detached and aloof but they’re also fun, interesting, independent and know their own mind.

If you want to know what an authentic Aquarian is like then seek out people who were born between February 3rd-6th 1962. Depending in what time zone they were born, many of these individuals came into the world at a momentous time in history when all seven personal planets, the Sun, Moon, Mercury, Venus, Mars, Jupiter and Saturn were in the same sign of the zodiac, the sign of Aquarius. This event happens rarely and as with any stellium (four planets or more in the same sign), it gives an extra boost of Aquarian energy.

I have been fortunate enough to meet two people born under this unique Aquarian signature and I met one of them at an astrology conference in California in the 90’s. He was one of the most wired and buzziest individuals I’ve ever met and it was a real overdose of ‘air’, Aquarius’ element. He blew into my life like a whirlwind talking 19 to the dozen, swept me off my feet and whooshed out of my life as quickly as a tornado. He’s not someone I’ve ever forgotten.

Anyone with this signature in their charts will make their mark. These are social human beings who care about the world they live in whether their individual passion is astrology, technology, human rights, politics or any other field of activity where they can make advances in life and improve the world around them.

Having googled the Internet, I’ve just discovered that the actress Jennifer Jason Leigh was born on February 5th 1962 at 12:33 pm in Los Angeles, USA and yes, she has all seven personal planets in Aquarius. Plus she has Uranus directly opposite her Moon in Aquarius conjunct the MC (career point of chart) and she’s known for some seriously ‘out there’ acting roles. I remember her most vividly as ‘Hedy’ the very scary friend in the movie Single White Female (1992). It’s not surprising that she’s attracted to characters who live life on the edge. Wikipedia quotes:

“Leigh has a reputation for playing characters on society’s bottom rung, often prostitutes or junkies.  She is also known for her intensive method-inspired research into her roles”

The Age of Aquarius

Undiluted Aquarius can be seen as the outcast, the outsider and the hippy era of the 60’s fits the bohemian-style Aquarian who’s a free-loving rule-breaker. In astrology circles, there’s a lot of debate around when the Age of Aquarius begins/began. Astrological Ages are huge swathes of time, lasting for approximately 2000 years and they give rise to what’s called the precession of the equinoxes.

The stellium in Aquarius in February 1962 and the hippy era of the 60’s are my bet for when the Age of Aquarius truly began. So for the next four weeks dust off your flares, wear the colours of the rainbow and embrace the innovative, outrageous and genius sign of Aquarius.