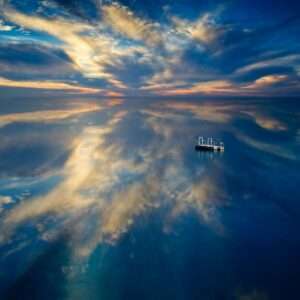 One of the major planetary aspects of our generation took place last year on September 17th 2015 when Jupiter in Virgo was opposite Neptune in Pisces and some of the key astrology in 2016 follows on from this powerful opposition.

To understand the astrology this year, it’s important to consider the symbolism of the Jupiter-Neptune theme. Both planets are the traditional (Jupiter) and modern (Neptune) rulers of Pisces.

They are expansive planets; in mythology Jupiter ruled the sky and Neptune ruled the sea. They are planets that represent hope and you don’t have to look any further than our current refugee/humanitarian crisis to see how this astrology is mirrored in world events.

Jupiter rules journeys and thousands of refugees continue to flee their countries (Virgo is an earth sign) and many are giving themselves up to the mercy of the sea (Neptune in Pisces) in search of safety. They make their treacherous journeys carrying little but hope and many of them, including young children, have lost their lives at sea.

It’s a hugely sad situation and as Neptune rules compassion, caring and sensitivity and Jupiter expands what it touches, many people are starting to open their hearts and help in any way they can.

Yet this isn’t the case for everyone and astrologically this is due to a third planet which is pulled into the opposition by square aspect, creating a dynamic T-square combination.

This planet is Saturn in Sagittarius. Saturn, the planet of authority, rules boundaries and in Sagittarius, the sign of all things foreign, the symbolism is clear in what’s happening in our world.

Border controls, governments setting new rules and laws, strategies to help the refugees but also to stem the flood. Saturn represents denial and those people who don’t want to open their doors and give sanctuary to people in need.

It’s not going to be an easy time ahead on a global level but both as individuals and as representatives of our country, we’re at the peak point of being asked where our heart lies and what we believe is right to do.

Here are the dates of these powerful square aspects:

In your life personally, this can play out in different ways but look for where you are feeling either hopeful or lost. Jupiter and Neptune on their own offer little rationality but Saturn is the realist par excellence. You will feel this most deeply if it links in to your own chart and the mutable signs, Gemini, Virgo, Sagittarius & Pisces are most likely to experience the strongest pull.

The Jupiter-Saturn square can indicate a clash of values and beliefs, two different ways, the old v. the new, modern v. traditional. In your own life, it might show up as conflicting opinions, someone who’s stuck in the past whilst you’re ready to embrace the future. It’s the person who shouts Yes, go for it (Jupiter) v. the person who says No and is sceptical of you or your plans (Saturn).

This can play out as an inner conflict too; one minute you’re full of enthusiasm and optimism for what’s possible (Jupiter) and then the brakes slam on as you’re faced with fear or doubt (Saturn).

At its best the Jupiter/Saturn symbolism shows as the realistic optimist. You have your vision (Jupiter) and the means (Saturn) whereby you can turn your dreams (Jupiter) into reality (Saturn).

The Saturn-Neptune square is a similar clash as Jupiter and Neptune have much in common, both boundless planets squaring up to Saturn, the master of boundaries and limitation. There’s a sense you have to lose yourself or remain in a state of questioning before you find the answers you seek or the direction you need to take.

Surrender, sacrifice & salvation are Jupiter-Neptune themes which are heart-led. These big square aspects are rarely about the ego or personal issues but something that’s beyond your everyday experience or outside your everyday reality.

In 2016, look for where you’re being called forth, whether seduced or inspired, and what gets in your way. Once you tap into your own ‘flood’ and the river carries you on its way, you can’t stop what’s set in motion.

This excerpt appears from my popular eBook Your 2016 Horoscopes. You can now read your own and your friend and family’s star signs for the discount rate of £7.50 (over 3,000 words per sign).